Following the success of their Ile de France, Compagnie Generale Transatlantique was determined to build the largest and most beautiful ship in the world. The design of the ship eventually fell to Russian Émigré Naval Architect Vladimir Yourkevitch. Designed for deluxe trade, Normandie was appointed in a lavish art deco style that also helped to redefine the aesthetic of the liner age. Owing to the tremendous rivalry with Cunard who were planning the Queen Mary, Normandie was build amid great secrecy. She was launched in 1932, and began her maiden voyage from Le Havre to Southampton and New York on May 29, 1935.

In the process, she captured the Blue Riband for the fastest crossing (29.98 Knots). On her return passage, she became the first ship to cross the Atlantic at more than 30 knots. The Queen Mary bettered both runs the following year, though in 1937, Normandie captured the Blue Riband in both directions with a maximum speed of 31.2 knots. Normandie’s last westbound voyage began on August 23, 1939 and she was held at New York at the outbreak of World War II.

The US Government ceased her on December 12, 1941 and she was converted as a troop transport. On February 9, 1942, just before she was to have made her first voyage under the American flag as USS Lafayette, a fire broke out and in a matter of hours she was gutted. Her salvage provided invaluable training for hundreds of Navy salvage experts and she was refloated. She was eventually sold and broken up at Newark, New Jersey. [Text originating from: Link 1]

Radio station: The August issue of the American magazine, "Short Wave Craft", in the year 1935 tells a very interesting story about a unique radio broadcast from the Statue of Liberty. It happened this way.

The French passenger liner "Normandie" began its maiden voyage from Le Havre in France just 68 years ago, on May 29, 1935. This luxury liner was the largest and most luxurious passenger ship afloat at the time, at more than 1,000 ft long. The "Normandie" crossed the Atlantic on this its maiden voyage arriving in New York just five days later.

At the time of its launching two and a half years earlier, on October 29, 1932, Radio Paris made a shortwave broadcast to the world of the ceremony. While out in the Atlantic on its maiden voyage, the "Normandie" made several music broadcasts en route as was the custom of the day. And on its arrival in New York on June 3, 1935, there was another spectacular and historic radio broadcast.

A welcoming program for the arrival of this new ship was compiled in Washinton DC and this special broadcast was fed by telephone line to the Statue of Liberty on Bedloe's Island in New York harbor. On the torch in the upheld hand of the Statue of Liberty was a special radio transmitter that modulated a beam of light.

This pulsating modulated light beam from the Statue of Liberty was picked up on a special receiver on the "Normandie" some five miles distant. The signal from this unique location was de-modulated on the moving Passenger liner and fed into the public address system as well as into a 50 watt shortwave transmitter. This small and specially installed shortwave transmitter relayed this broadcast back to New York where it was received by mediumwave station WEAF and fed into the NBC Red Network for a nationwide relay.

In addition, the General Electric shortwave station at Schenectady, station W2XAD, also carried the same programming which was picked up in France and re-broadcast throughout their country on their mediumwave and longwave networks. The French shortwave service also broadcast this unique program as a relay to the world.

Four years later again, after many voyages across the Atlantic, the "Normandie" was caught by the vicissitudes of war. In September 1939, the luxurious "Normandie" was detained in New York harbour by port authorities.

Two years later again, in May 1941, the Coast Guard seized the "Normandie" and at the end of the same year, the ship was seized again, this time by the American navy. They laid plans to convert this fabulous and now outdated passenger liner into a utilitarian troop carrier with a new name, the USS "Lafayette".

During the hurried work of conversion on the ship, a fire broke out. So much water was poured onto the burning ship that it capsized and sank right at its berth in New York Harbor. In fact, it was so cold on this February day in 1942 that the entire body of water in the ship just simply froze into one great ice block.

For the remainder of the war, the ship lay on its side, a slowly rusting hulk that betrayed no evidence of its former glory. In 1945, work began to break up the ship and sell it off for scrap. Demolition was completed on October 6, 1967.

At the time of the fire back on February 9, 1942, the ship again made the headlines, not only in the newspapers, but also on radio. It was the centre of attention for a dramatic nationwide broadcast on network radio. The noted commentator, Graham McNamee, made a live dockside broadcast about the progress of the fire and the gradual capsizing of the ship and this was heard nationwide over the NBC radio network.

Location: Broadcasting while traversing the Atlantic 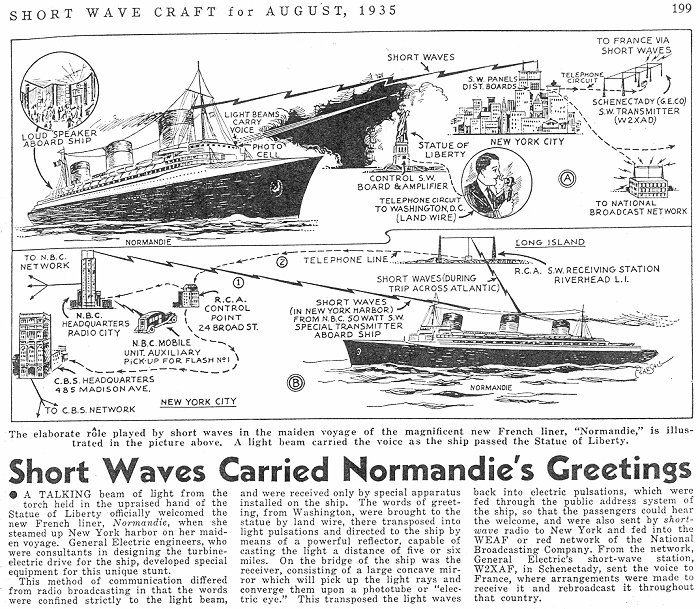