Ship details: The Silvretta was built in 1948 by De Groot and Vliet at Slikkerveer Holland, she was 630 tons and 186 feet long. The Silvretta was purchased for £25,000 and a further £65,000 was spent on converting her to a radio ship by MeBo Telecommunications Ltd in Zurich (Switzerland). The ship was renamed Mebo II and then converted into a radio ship in the same shipyard that built her.

On 22nd January 1970 the Mebo II departed Slikkerveer for an anchorage off the Dutch coast. In the late afternoon of March 23rd the Mebo II set sail for the English coast, anchoring off Clacton at 09:00 hours the next morning. On 23rd July RNI closed down at 10:55 hours. With the aid of a crane ship the Mebo II lifted its anchor and sailed back to Holland. On 29th August at 13:30 hours Dutch business man Kees Manders made his way in the tug Huskey to the Mebo II. He climbed aboard the Mebo II and demanded that the ship be taken in to Scheveningen, his demands were rejected and was told to leave, when he left, he threatened to cut the anchor chain and tow the ship in. The crew broadcast the events, and those on board the Huskey prepared to use a water cannon on the aerial mast, the tug Eurotrip was spotted, and the raiders made off. Later the Dutch frigate Van Nes arrived and stood by in case of further trouble. After RNI´s closedown on 24th September 1970 a crew from Radio Veronica took over the Mebo II, which stayed at its anchorage. Reports in the press stated the ship was to be sold to an African concern, but nothing came of it, then the true reason for closing leaked out, Radio Veronica had paid RNI 1,000,000 Guilders to stay off air for two months. On 5th January 1971 the Captain on board the Mebo II was tricked into going ashore, and Edwin Bollier took control of the ship. In January test broadcasts were made off the coast of Belgium. Many legal arguments followed, it was revealed that RNI had taken 1,000,000 Guilders in bank notes to the Veronica offices, but they had refused to accept them. The Mebo II was moved to Cadzand, on the Dutch boarder but the anchorage proved very rough, and the ship went back to Scheveningen. 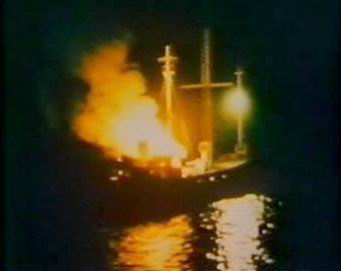 On 15th May 1971 Tom van de Linden and two men left Scheveningen in a rubber dingy. Three hours later they arrived along side the Mebo II. Two of the men climbed aboard, lit a fire in the engine room and made off. Immediately there was an explosion and the stern of the ship quickly caught fire. SOS calls were sent out on the broadcast transmitters and the ship to shore link. The tug Eurotrip took ten crew off the ship, leaving only the captain, transmitter engineer and ships engineer on board. The Dutch Royal Navy frigate Gelderland stood by, while the fire fighting tug Volans doused the stern of the Mebo II with water. By 02:20 hours on 16th May the fire had been extinguished. Broadcasts resume, as the studios and transmitters had escaped damage. Damage estimated at £28,000 was caused in the fire. The three men made it back to shore and sunk the dingy and hid the frogman suits, but within a few hours they had been captured by the police.

On 22nd November 1971 the Mebo II lost its anchor and started to drift. Broadcasts stopped as the ship entered Dutch territorial waters. The lifeboat Bernard Van Leer, a Royal Dutch Navy Neptune aircraft, a helicopter and the tug Smithbank all raced to the Mebo II's assistance. By 11:00 hours the Smithbank had the Mebo II in tow, and at 16:30 RNI was back on the air. On 23rd February 1973 the ship lost its anchor and drifted towards the coast, and broadcasts ceased. The next day a new anchor was fitted and the ship sailed back to its old anchorage.

After the Dutch Marine Offences Act coming into force on September 1st 1974 it was planed the ship would enter harbour for an overhaul then sail to Italy and broadcast as Radio Nova International from the gulf of Genoa. Bad weather prevented the Mebo II from being towed to the De Groot van Vliet shipyard for one week. The Mebo II arrived at the shipyard on 9th September. Customs officials sealed the cabins, in which the records and other studio equipment had been placed. The Mebo II was dry docked, and twelve inches of crustation was removed from the ships hull. On 10th October both ships were seized. The new Dutch laws did not permit ships to carry transmitters except for maritime communications. On 10th December the courts decided that both ships could leave port, once the transmitters had been removed from the Mebo II. It was pointed out the Mebo II was registered in Panama, and transmitters counted as cargo. On 25th March 1975 the appeal was heard and it was agreed that the ship was under the jurisdiction of Panamanian law. On 2nd January 1976 the court case was finally settled, under the condition that the Mebo II sailed within two months and would not transmit from European waters for two years. A bond of 250,000 Guilders was ordered and a fine of 5,000 Guilders for having a radio ship in Holland after the 31st August 1974 was made. In November 1976 both ships (the Mebo II and the Angela) were dry docked again, the hulls cleaned and repainted.

On 10th January 1977 both ships tested their engines by sailing around the harbour. On 14th January both ships left the harbour and sailed down the canal towards Rotterdam. Problems with the authorities arose because a full crew was not on board. A new crew was taken on while in Rotterdam, and supplies were taken on board at Slikkerveer harbour. The next day the Mebo II damaged two ships when she collided into one of them. A detention order was placed on the Mebo II. Arrangements were made to pay the owners of both ships and the detention order was removed. On 16th January at 10:30 hours the Angela headed seaward followed by the Mebo II. Captain van der Kamp was put in charge of both ships. On 20th January both ships took shelter off Brest, France due to bad weather until the 28th. On 1st February both ships enter the Mediterranean Sea. On 2nd February they took on supplies in Ceuta, Morocco. On 9th February the vessels arrived off Tripoli (Tarabulus), but were not allowed into port because of problems with the ships papers, that referred to the ships as Mebo and Mebo II. On 14th February both ships entered the harbour, the crew of Cape Verde Islanders were paid off and another Dutch Captain takes over. Both ships were hired by Colonel Ghadaffi while land based transmitters are installed by Mebo Ltd for the Peoples Revolutionary Army. On 8th August 1977 both the Mebo II and the Angela set sail for Benghazi where they arrived on 11th August. One hour later both ships sailed to Derna Harbour (about six-hundred miles east of Tripoli), close to the Egyptian border. On 30th October the Mebo II set sail for a new anchorage at Benghazi. On 4th January 1978 instructions were issued to take the Mebo II back to Tripoli. On 19th January the Mebo II arrived back in Tripoli. In April 1978 the Mebo II was renamed El Fatah, and was now owned by the Libyan Government. In 1984 both the Almasira (ex Angela) and the El Fatah (ex Mebo II) were used for target practice by the Libyan Navy. The ships sank in the Gulf of Sidra, Mediterranean Sea.