A fishing vessel, based in Scheveningen and registered as "Scheveningen 324", used as as a tender ship for the Mi Amigo in 1973 and 1974, operated by Jac Vrolijk of Scheveningen from the Tweede Binnenhaven. It was a sister ship of Radio 270'sOceaan VII, of Radio Delmare's Aegir II and of the Dolfijn (also used as a tender ship in the seventies). Paul Rusling remembers the Morgenster very well, it was almost identical to the Oceaan 7. Jac Vrolijk also operated the Zeester (a bigger very different ship) and a ship called the Dolfijn, which was always fishing and really smelled bad of fish.

Radio station: Radio Stereo Patat by the Comité Nederland Muziek as part of the official VPRO broadcasts, originating from a low powered relay transmitter on board the vessel.

Location: Off the coast of Scheveningen (Netherlands) on 9th April 1973 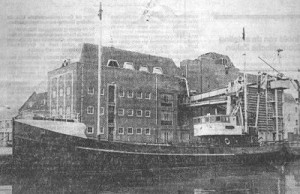 In early 1981, the boat was purchased by Leendert Vingerling for the Radio Delmare organisation for 35.000 guilders. There was a generous financier in the background who sponsored the Rotterdam singer René Statson whose records weren't played on Hilversum 3... The boat sailed to Maassluis where it was fitted out as a broadcasting vessel at the Scheepswerf de Haas. Officially it was a promotional vessel which was due to sail to different harbours to promote the singer. When a "trial trip" was planned in May 1981, the harbour officials informed the RCD so that the crew on board was examined. There was no evidence for a radio ship on board. But Leendert's charts showed two little marks on it which were taken as an "evidence" for the planned location of the vessel. When one of his colleagues confessed, the boat was confiscated and brought to the "entrepot" harbour of Rotterdam. After a trial lasting for two years the boat was given back to its owners. Then it was sold to someone from Harlem, so that the financier finally got a part of his 120.000 guilders investment back. [Information by Leendert Vingerling]

The ship had two antenna masts (originating from the MV Magdalena) and a complete studio onboard (but no transmitters).