The landmark that would probably be most remembered by generations of visitors to Coconut Island and Kane`ohe Bay is the moored sailing ship Seth Parker (née Georgette), which Fleischmann heir Christian Holmes purchased in 1935. The four-masted schooner was originally obtained by Holmes for use as a bait ship for his Hawaiian Tuna Packers. Built in 1918 as a lumber hauler at Columbia Yard in Portland, Oregon, the Georgette was 188 feet long and weighted 867 tons. It was initially operated by G.W. McNear of San Francisco and was placed on the New Zealand run. The schooner's agent in San Francisco was the Hind-Rolph Company and was affiliated with Holmes' future father-in-law, Robert Hind. In 1920 the ship worked the route from Alexandria, Egypt, to Seattle. It then was placed in Atlantic service until 1932. The schooner was purchased the next year by radio personality Phillips Lord, whose character was known as Seth Parker. After the installation of a Diesel engine, the ship was rechristened after Lord's character.

Phillips Lord conceived an idea to sail his new ship to various exotic ports, with a team of celebrities, to broadcast his radio programs. On its inaugural voyage, the Seth Parker sailed from New York, calling at various ports on the East Coast to broadcast the show. A special song was ever written to commemorate the journey. The ship passed through the Panama Canal and sailed to the South Pacific. In February 1935, the ship promptly sailed into a typhoon off the coast of American Samoa. The Seth Parker took on water, leaving her wallowing and unmanageable in high seas. Following a radioed SOS by Captain Frank Eckmann, the H.M.A.S. Australia steamed toward the schooner. The Seth Parker survived but was trapped in another storm three days later. The American governor of American Samoa, Otto Dowling, also informed the floundering schooner that a navy tug would be sent out should it be found unnecessary to abandon it. While the Australia stood by, having picked up nine passengers, the tug Ontario took the schooner safely in tow to Pago Pago.

The aging ship's hull apparently could no longer withstand the strain of strong winds upon the sails. The masts would strain and spread the seams of the hull, allowing seawater to rush in. The damage to the ship during the typhoons was so great that the radio crew ended any thoughts of further broadcasts aboard the wounded ship and went home.

In April 1935, Hawaiian Tuna Packers took an option on the schooner, then moored at Tutuila. Holmes had tanks fitted in the ship, with the idea of filling them with sardines to use as bait for tuna. The ship was sold to Chris Holmes' company for $10,000, a tenth of what it cost Phillips Lord to buy and outfit the Seth Parker for his exotic radio junkets. The vessel sailed for Honolulu on 3 July and arrived on 16 September. The crew had complained that water was constantly awash on its decks from the bilge pumps. The ship's food supply was down to one case of beans and a barrel of wormy flour. The beautiful beamed ceiling and richly paneled walls, refrigerators, rifle racks, broadcasting room, and other fine appointments were all gone. The jib boom was full of dry rot, according to schooner captain Eckmann. Its hull was green with moss and algae. But eventually this modern H.M.S. Bounty limped into Honolulu. In March 1936, Christian Holmes had the Seth Parker towed from Honolulu Harbor to Kane`ohe Bay and Coconut Island. Apparently the bait survived the voyage. Anderson remembers that Holmes filled four of his Coconut Island fishponds with the sardines brought in from Samoa. But because of the general unseaworthiness of the schooner, Hawaiian Tuna Packers abandoned further ideas to use the ship as a bait hauler. The retired Seth Parker was towed to an artificial lagoon constructed adjacent to Coconut Island, where it was scuttled in a few feet of water. Holmes modified the interior to use as a motion picture theater, laboratory, and bar. Guests could sunbathe on the deck. A few staterooms were equipped for overnight stay. Reflecting his avid interest in marine biology, Holmes installed laboratories in the stern of the schooner to serve Hawaiian Tuna Packers fisheries research. The movie theater on board was a major attraction in those pre-VCR days. Holmes' partner Alan Davis also ran Consolidated Amusement, so he could easily obtain all the first-run movies for Coconut Island gatherings.

The stately silhouette of the Seth Parker remained intact until Holmes' death in 1944. The masts were removed around 1945. Some attempt was made to maintain the hull during the next few years, but the ship slowly rotted away. According to Steve Miranda, his father Robert removed the 400-pound anchor and dumped it into Kane`ohe Bay. A fire in the 1960s accelerated the ship's demise. As the paint on the hull wore off, the original name Georgette and home port of San Francisco became visible. Today all that is left is a mound of green vegetation where the proud Seth Parker once was berthed. For many years the wheel of the ship was on display in the main house on Coconut Island, but just before the sale of the private section of the island by Hachidai Corporation the wheel was donated to the Hawai`i Maritime Center at Honolulu Harbor, now a part of Bishop Museum. [Copyright 2003 P. Christiaan Klieger. Excerpt from Moku o Lo`e: A History of Coconut Island, in press]

Radio station: In early 1935, the schooner Seth Parker was in the South Seas on a geographic expedition. During its visit into the South Pacific, several radio broadcasts were made back to the United States for relay nationwide on one of the mediumwave networks.  These point-to-point relays were accomplished through the radio transmitter on board the “Seth Parker” which was allocated the callsign KNRA and seven channels in the shortwave bands.

A report in Radio News for July 1934 on page 15 states that KNRA on the Seth Parker was heard in the United States on many channels, including 6160 kHz at 10:00 pm Central Standard Time. [Many thanks to Dr. Adrian Peterson] 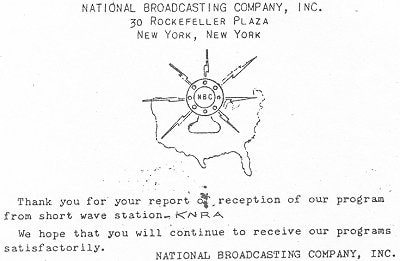